The ground floor at Inveraray provides visitors with a fascinating historical insight into one of Scotland's most famous castles.

The modest Entrance Hall misleads visitors of the grandeur which lies in store and on entering the State Dining Room they are taken aback and stunned by the opulence and colours of the hand-painted interior. Further exploration leads to the French-influenced Tapestry Drawing Room with original Beauvais tapestries. A concealed door leads to an exquisite display of Oriental and European porcelain in the China Turret.

The castle tour routes back to the Entrance Hall and into the magnificent Armoury Hall where visitors are greeted by the highest ceiling in Scotland and a vast array of arms on display before moving onto the Saloon with its remarkable collection of portraits and furniture. 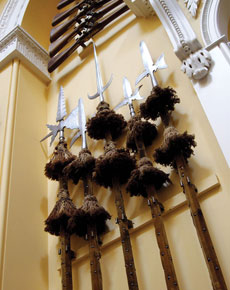 Developed in keeping with Vanbrugh's original sketch from 1720 and using a similar concept which he used for the impressive collection of armoury at Inveraray Castle, Castle Howard and Blenheim Palace, the dramatic Armoury Hall soars to 21 metres in height, the highest ceiling in Scotland. The central ceiling displays the impressive family crest and on the ceilings either side are the crests for the various cadet branches of the Campbells.

Breathtaking displays of arms in elaborate patterns adorn the walls, including 16th and 17th century pole-arms and roundels of Brown Bess muskets dating from around 1740, with spandrels of muskets alternated with Lochaber axes. The latter and 18th century Scottish Broadswords date from the time of Queen Victoria's first visit to Inveraray in 1847.

In the showcases are a fascinating collection of treasures associated with Inveraray and the Castle, which help illuminate the long and colourful history of the Campbell Clan and the major role they have played in creating the history of Britain. A highlight of the collection is the dirk and sporran belonging to Rob Roy MacGregor (1671-1734). 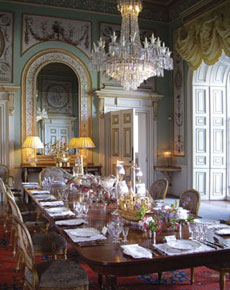 Visitors to Inveraray Castle are often amazed by the brilliance of the extravagant decoration in the State Dining Room. The elaborate painting was completed in 1784 by two French artists Girard and Guinand, whose work only survives at Inveraray.

The painting is of a quality unparalleled in Britain at that time and it is of little surprise to find that Girard was one of the principal decorative artists employed by the young Prince of Wales when decorating his grand residence Carlton House.

The delicate tapestry dining chairs with gilding by Dupasquier and original Beauvais tapestry upholstery were commissioned by the 5th Duke on one of his visits to France in the 1780s.

The dining table, by Gillow of Lancaster dates from about 1800, the outstanding ormolu-mounted sideboards are from the late 18th century and the Waterford chandelier (the largest of three, of which the smaller pair hang in the Tapestry Drawing Room) is circa 1830. 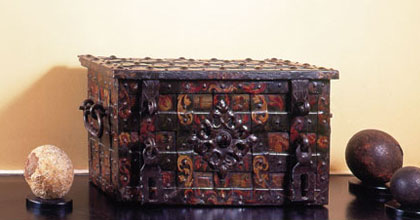 The modest entrance hall at Inveraray Castle comes as a surprise to most visitors, with an an interesting story behind it.

In the original designs the Castle was to be entered by the South and when work commenced in 1746 the builders followed the architect's plans. However, after the structure was complete, the 5th Duke changed his mind, and decided to move the entrance to the North side of the building.

When completed in 1789 what had originally been intended as a long gallery running the entire length of the building had been sub-divided, forming the Tapestry Drawing Room & State Dining Room either side of the modest entrance hall. In 1780 after the 5th Duke had taken occupation, the decoration was completed with the addition of the delicate Gothic plasterwork seen today.

Items on display in the hall include a portrait of John, 2nd Duke of Argyll by Sir Godfrey Kneller and a marble bust of the 6th Duke by Samuel Joseph of Edinburgh. The decorated strong box commonly known as an 'Armada Chest' is German, circa 1600 and the display of cannon balls were recovered from Tobermory Bay on the Isle of Mull. 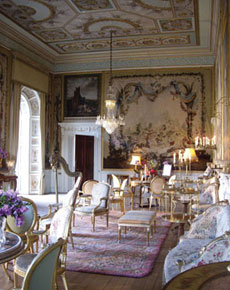 Exquisitely decorated in the Parisian style and representing the most sophisticated tastes of the 1780s, this remarkable room still retains the original set of Beauvais tapestries in the setting specifically designed for it.

As well as these magnificent tapestries, restored at Hampton Court Palace in 1976 after the huge fire, the room boasts architectural decoration by Girard. A highlight is his painted shutters with its delicate and fine brushwork.

The original ceiling was designed by Robert Adam and was painted by Girard. Other features of the room include a painting of Lady Charlotte Campbell (daughter of the 5th Duke) as 'Aurora' by John Hoppner, a pair of confidantes with matching armchairs and a circular giltwood palm tree table with a specimen marble top inlaid with the 7th Duke of Argyll's coat of arms.

The entrance to the turret from the Tapestry Drawing Room is ingeniously concealed by a pair of double doors covered with tapestry panels integrated into the design of the drawing room. Interestingly, the decorative ceiling is made of papier-mâché and was designed by Robert Mylne in 1773.

This room is surveyed by a portrait of the 3rd Duke of Argyll in the robes of Lord Justice-General of Scotland by Allan Ramsay.

Originally designed as a library, this room now displays a wonderful collection of Oriental and European porcelain, including Japanese Imari-ware of the early 18th century, a Meissen dessert service, a large Derby dinner service from the early 19th century and other interesting pieces of English porcelain. 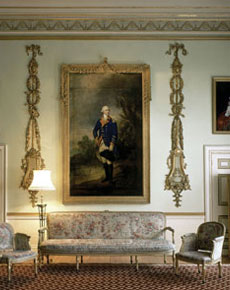 A remarkably modern living room for its time, the Saloon was chosen by the 5th Duke to be a relaxing area, where guests could have breakfast, play billiards or make music.

In the corner is a grand piano where the songwriters Lerner and Loewe composed some of the songs for their musical My Fair Lady, while staying at the Castle.

Since the early 1780's the main displays of Campbell family portraits have been arranged here, and it is possible to follow the family through history, starting with a portrait of the first Duke and going right up to today with a photograph of the present Duke and his eldest son, the Marquess of Lorne.

At either end of the Saloon are two paintings which face each other and reflect an intense rivalry between the artists. At one end there is a Gainsborough portrait of Field Marshall the Rt. Hon Henry Seymour-Conway, son in law of the 4th Duke of Argyll. If you look at the picture closely there are obvious signs that the picture was enlarged after it was finished, so it would match the size of the Pompeo Batoni of the 8th Duke of Hamilton, step-son to the 5th Duke at the other end of the room.

The paintings and artefacts in the Saloon trace the family history from the Earls of Argyll, through to the creation of the Dukedom. The family famously switched their allegiance from Charles the Second to Oliver Cromwell and then at the restoration, back to the Monarchy.

The North West Hall contains a collection of costumes worn by the family through history to the present day. The display includes the Coronation robes of HRH Princess Louise, the robes of the Knight of the Thistle and the present Duke's uniform of the Royal Company of Archers. A more recent addition is the stunning cream gown designed by Bruce Oldfield and worn by the current Duchess at her wedding to the 13th Duke in June 2002.

The Duke's Coronation robes and coronet are also on display, as is the baton of the Hereditary Master of the Royal Household in Scotland. The appointment dates from 1461 and the baton is still used today by the Duke for ceremonial occasions.